After the victory of the Revolution of 1911, the Qing Emperor abdicated and the Republic of China was founded. When the Republic of China was founded, because the monetary system had not yet been established, most of the major mints still used the former Qing steel mold to cast coins for circulation. At that time, Sichuan changed to cast Sichuan Copper Dollar, which had first-class currency values of 200 Wen and 500 Wen. Subsequently, in the "Provisional Presidential Decree" issued, it was proposed to "publish new models and drum-cast commemorative coins". After the national government unified the currency models, the original coins stopped being cast and distributed, so the Sichuan Mint's 200-text coins were extremely precious because of their small amount of casting and short circulation time. 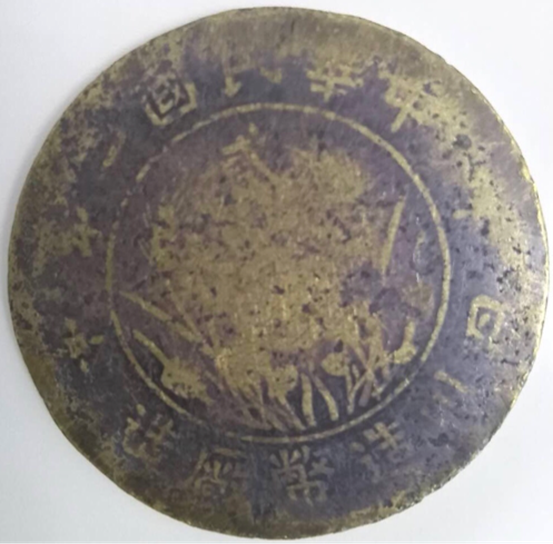 Sichuan Mint General Factory made two hundred double-flag coins, with the word "two hundred words" cast in the front ring of the coin, surrounded by wheat ears at the lower part of the ring, the words "two years of the Republic of China" cast on the outer ring, and the words "made by Sichuan Mint" cast on the lower part, with a four-corner star pattern on the left and right sides; There are two flags crossing each other in the middle of the back of the coin. The flagpole is tied with bent wreaths and wreaths. The two flags stand upright and are located in the bead circle. The English font "Two Years of the Republic of China" is on the top of the circle, and the English words "200 characters" are on the bottom. According to the flag pattern on the back of this coin, there are differences between straight tassels and curved tassels. The 200 pieces made by the Sichuan Mint belong to the double flag of curved tassels. 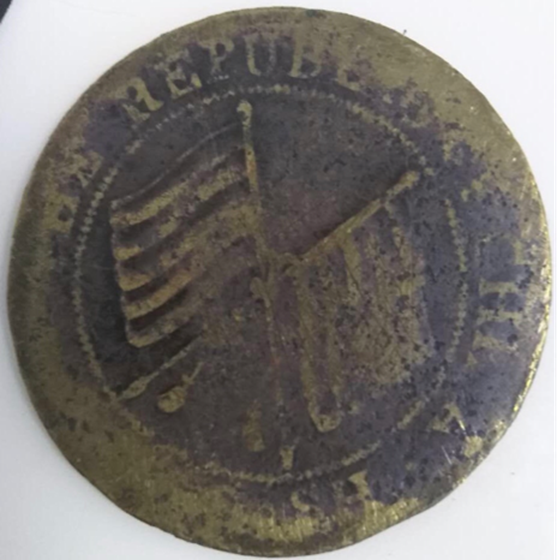 The layout of the 200-Wen copper coins in Shuangqi is relatively large because they are not produced by a single foundry. There are only dozens of formats with obvious differences. Double flag 200 copper coins can be divided into two categories according to the difference of the flag tassels hanging down under the double flag. If the flag tassels hang down vertically, the belt is called "straight tassel version"; The flag tassel hangs around the flagpole, commonly known as the "curved tassel version".

In 1913 (in the second year of the Republic of China), Hu Jingyi, who succeeded Yin as the governor of Sichuan military government because Yin Changheng led the army to fight against rebellion, continued to cast "Han" and added a kind of copper coin with a large denomination of 200 Wen, which weighed seven money. The face value of "200 Chinese characters" in the central straight book of coins is divided into Jiasui patterns on both sides, with the sugar year number "Republic of China two years" on the upper side, the rust factory name "Sichuan Mint" on the lower side, and cruciferous stars on the left and right sides. There is a cross double flag in the center of the coin back, with a special circle on the outer ring, with the rust English "THE REPUBLIC OF CHINA" on the upper side and the rust English "200 cash" on the lower side. This is the only copper coin in Sichuan during the Republic of China that used English. The larger the denomination of cast steel, the thicker the profit. Hu Jingyi's two hundred copper coins. One can be exchanged for ten coppers and twenty coppers. A ten-Wen copper coin weighs two dollars, 20 coins weigh forty dollars, and a two-hundred-Wen copper coin weighs only seven dollars. Therefore, Hu Jingyi can plunder people's property by casting a two-hundred-Wen copper coin, which is sixteen and a half pieces of ten-Wen silver. In that year, as many as 2 million copper coins were cast in 200 pence. Since then, the casting amount has increased year by year. In 1917 (in the 6th year of the Republic of China), after Luo Peijin and Dai Qiren Sichuan came into power, they simply stopped casting ten and twenty Sichuan copper coins, and they cast fifty and one hundred Sichuan copper coins and two hundred double flag copper coins. By around 13 years of the Republic of China, the large denomination copper coins of 200 Wen were completely flooded in the market in Sichuan, while the small denomination copper coins disappeared, or flowed out of the province, or were melted and recast. There is a lack of small denominations of copper coins to make up for private transactions. As a last resort, two hundred banners were slaughtered in half, or four pieces. When one hundred and fifty articles were used, Sichuan folks commonly called them "slaughter boards"

Sichuan Copper Coin Military Government was built when the Revolution of 1911 broke out in October, 1911, and Dahan Sichuan Military Government was established in December, and Sichuan Military Government took over the Sichuan Mint Factory in Chengdu. In order to meet the needs of military supplies and road protection movement, the silver and copper coins of the former Qing Dragon Model were abolished, and the silver and copper coins of Sichuan were newly created. Since 1912, the Sichuan Mint has officially opened and cast the "Han" copper coins of Sichuan military government. This copper coin is a fine coin minted in 1913. It is covered with natural paste. It is a fine copper coin with high collection value, and it is also a very important category, and it can even be said to be the main variety of copper coins in the Republic of China. The appreciation of its future value is limitless. Although the collection has experienced endless years, the grain is still clearly visible, and the rust on it has also witnessed its historical accumulation, which has very obvious historical transitional characteristics and has indescribable collection value. Copper coins are well preserved, Qian Wen and outline are clear, and they have high historical value, artistic value and collection value.